This afghan loom is done with the knit/purl stitch patterns like hats. It has a 72" circumference.  Size of finished product will be less than that and vary based on yarn and stitch used.  Averages around 45-50 inches wide.

Easier to use then a straight one. Like it. too bad won’t fit in backpack while hiking 🤣🤣🤣

I love these looms. I just started a blanket last night! This loom is very big *( a bit awkward so I'll need to find my groove) so I can't take it in the car. But it will knit up a blanket / throw quickly with NO seams of any kind!!! This company seems to have exceptional customer service and the cost of the loom is so worth it. Buy it ... you'll love it. Quality is exceptional compares to the plastic looms! 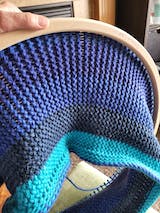 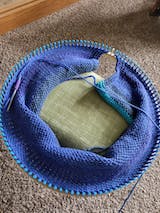 The 112 peg loom I purchased was well made and I am enjoying it very much.
Thank you!

D
Debbie Altman
It's Good but

Using it for the first time, overall it's good. I like the size, I like the 5/8" gauge BUT the "divits" on the front of the peg catches my pick every time. While it doesn't hurt the stitch, it's aggravating. The height of the new pegs is a great idea but personally, I prefer the old model pegs. The new ones tend to wobble especially if you pull to hard. Breakage will be something that happens no matter what I believe. It's nice that a tiny bottle of glue is included in the sale BUT in general, that means breakage will probably happen. Since glue is included then a set of at least 5 replacement pegs should also be sent along rather then the yarn guide. Those are the reasons I gave the loom 4 stars. Will I purchase another loom from Cindwood - probably but will request the old model pegs if that's possible. :)

Let customers speak for us

I tend to knit very tight and have broken a few plastic looms, but I have had no issues with these ones. The looms are very well made and the pegs are exceptionally sturdy. these will be the only looms I use from now on.

Great idea to promote the hat not hate projects.

Love the looms. I am doing a afghan on the 160 peg loom. I have tons of dish cloth and towel patterns I've been saving. I also have a ton of cotton yarn. I can now use 1 strand of yarn istead of double. Don't care for bulky patterns.

This is a fun and easy to follow pattern. I was surprised how quickly this multi row pattern works up on the 160 peg loom!